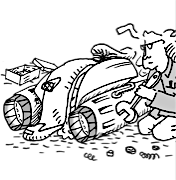 Excellent reproductions of AMAL style handlebar levers for air/ignition control. They are very detailed and show excellent craftsmanship. Can be used to control your choke mechanism, ignition advance/retard, exhaust baffling discs etc. Cables have to be modified or fabricated. All versions are made to fit 1” handlebars.

The design of these reproduction AMAL style levers goes back to the 1940’s and remained popular ever since. They are very detailed and show excellent craftsmanship. The selection includes clutch and brake levers, with or without small additional lever for air/ignition control. All versions are made to fit 1” handlebars. Clutch and brake cables have to be modified or fabricated.
more …

Waterproof universal ignition switch which will work trouble-free even in heavy downpours. The switch features OFF-RUN-START and HORN positions/functions. Can be used without a starter relay. The OFF position can be used to ground magnetos.
more …

These genuine Morris classics are for purists and feature a simple built-in auto advance and manual retard to prevent nasty kick-backs. They can be mounted with the mag head pointing to the right or pointing forward. This can be accomplished by changing the position of the bottom mount studs. The forward position requires the relay boss to be chopped off on engine cases thru 1964. Easy installation without fin grinding or smashing in pushrod covers. An Oring on the drive shaft tube prevents oil leaks. Choose from a bare, machined finish or with the mag head bead-blasted, which gives the MM74E a period cast aluminum look.
more …

If you check out photos of old Harley drag bikes they often had the trusty Linkerts swapped for flashy AMAL carbs and you bet that this wasn’t just for the looks. In their heyday AMALs were considered as performance carbs and they proved countless times that they were. Simple to tune and easy to service they soon became the preferred choice of racers and speed-oriented street bikers.
The AMAL Concentric Mk1 was introduced in 1966 and was a long awaited improvement of its predecessor, the Monobloc. It is smaller and lighter and has a completely concentric design. Air and idle adjusters are relocated for easy access. These current re-production "Premier Range" carburetters feature various improvements over the 1960s counterparts:

These levers allow for the installation of Fairbanks, Morris & Hunt magnetos with stock or similar handlebar grip advance/retard control, together with an adjustable base plate. No need to reach down to the magneto head and no more kick-backs.
more …