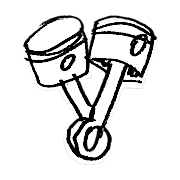 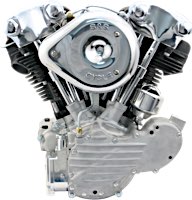 S&S KN-Series Engines
Knucklehead - the name describes a true legend and this engine design is without a doubt one of the important milestones in the history of Harley-Davidson. Introduced in the year 1936 the ohv-engined models in short time became synonyms for sporting, fast and reliable touring machines. Economically this layout proved to be a huge success for the Motor Company, too, because brand followers - and many others - quickly realized the outstanding qualities of this motorcycle. Design and technology of the Knucklehead turned out to be supremely sound and it became the prototype of all Milwaukee Big Twins, which significantly influenced all successive model groups down to the present day. The KN-Series engines by S&S closely resemble the appearance of a stock Knucklehead engine. However, numerous reforms enhance power, engine life, and reliability. The main improvement in design is the 1958-65 style flywheel assembly, which uses a splined sprocket shaft and a Timken sprocket shaft bearing on the drive side. This increased flywheel stability and strenght became necessary to handle the significantly increased power development. The rocker arm cover “tins” are another modern improvement. They are made from die-cast aluminum, and instead of being held in place by the valve guide, they are held down by valve spring pressure. A special gasket on the bottom of the lower “tin” provides a positive seal, and is much easier to service if needed, since the valve guides do not have to be pressed.
The selection includes 93” (1560 cc) engines with crankcases for early style chassis thru 1947, with 1955-64 tin primary and 1936-64 transmissions.
S&S KN-Series engines come completely assembled and ready to run with a electronic S&S Super Stock ignition system and Super E carburetor.
more … 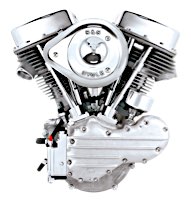 S&S P-Series Engines
The Panhead engine, which was originally produced from 1948 until 1965, has been hailed as the coolest looking classic engine of all time and the new P-Series engines from S&S captures that retro styling from the 50’s and 60’s, but with 21st century engineering. These engines were built to run and are loaded with modern technology. The heads are a new design based on the S&S Shovelhead SH-Series engines, topped with roller rockers (1.500 ratio). Also incorporated is the S&S hydraulic valve train, increasing cam choices dramatically and improving oiling throughout the engine. These P-Series engines feature 1958-64 style flywheel assemblies, which use a splined sprocket shaft and a Timken sprocket shaft bearing on the drive side. This increases flywheel stability and handles the significantly increased power development.
P-series engines fit 1948-’99 style chassis together with 1955-‘64 style tin primary covers. Included with every P-series engine are a Super E carburetor and a S&S Super Stock ignition with billet timer housing. Exhaust flanges are designed to accept Shovelhead type pipes.
more … 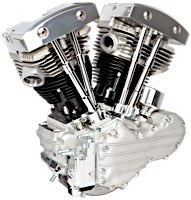 S&S SH74-Series Early Shovelhead Style Engines
The legendary Early Shovelhead generator engine was made by the Motor Company for 4 years only, from 1966-1969, and today it’s a rare bird. This version by S&S with stock 74 cubic inches combines authentic retro style with today’s technology for thousands of trouble-free miles. Fully assembled with the best components S&S has to offer, so factory specs are at least met and in most parts exceeded. The latter include bullet-proof steel flywheels, reinforced connecting rods, billet oil pump, billet rocker boxes, and roller rockerarms. The installed S&S 513G cam provides higher lift and increased valve timing for better performance. Top end oiling is provided through the pushrods which makes external oil lines obsolete.
SH74 Early Shovelhead engines are equipped with an S&S billet timer housing (empty: no ignition components). Ignition rotation is clockwise, like stock. Without intake manifold and carburetor, so you can choose whatever seems appropriate for your needs. Crankcases, cylinder heads and the gear cover have a cast finish, cylinders are black powder-coated and the rocker boxes are polished.
more … 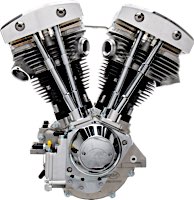 S&S SH80-Series Shovelhead Style Engines
Sometimes stock is enough and this is exactly what the SH80 Shovelhead engine provides. 80 cubic inches of Shovelhead performance which will reliably propel both your daily driver or your end-of-the-world expedition bike. Fully assembled with the best components S&S has to offer, so factory specs are at least met and in most parts exceeded. The latter include bullet-proof steel flywheels, reinforced connecting rods, billet oil pump, billet rocker boxes, roller rockerarms and a billet gear cover. The installed S&S H-grind cam is a dead-on reproduction of the stock H-D cam. SH80 engines come without intake manifold, carburetor and ignition so you can choose whatever seems appropriate for your needs. Crankcases and cylinder heads have a cast finish, cylinders are black powder-coated and the gear cover and rocker boxes are polished. Top end oiling is provided through the pushrods which makes external oil lines obsolete.
more … 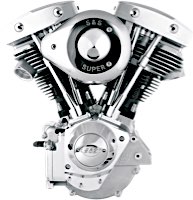 S&S SH93-Series Shovelhead Style Engines
The legend lives! For die-hard Shovelhead enthusiasts we offer these complete, ready-to-install Long Block engines, assembled by S&S builders with the finest parts on the market today. Start with the bullet proof crankcases, flywheels, cylinders, and heads which proved their performance since so many years, and finish with the latest premium valve train components. Crankcases and cylinder heads come with natural aluminum finish, the cast iron cylinders are black powdercoated. Billet gear cover, tappet guides, and rocker boxes look outstanding and offer the kind of performance you expect from an industry leader like S&S.
What you can’t see inside the engine is just as impressive. The S&S Shovelhead style tappet guides are designed around the quiet, dependable Evolution style tappets. The corrected tappet guide bore geometry assures correct valve timing with carefully selected S&S Evolution style camshafts installed in the gearcase. The unique adjustable Quickee pushrods are collapsible for easy removal and installation, but are stronger than stock style pushrods. Inside the billet rocker covers are S&S’s exclusive forged roller rocker arms. Top end oiling is provided through the pushrods which makes external oil lines obsolete. To let them breathe deeply all S&S Shovelhead engines are supplied with a Super E carburetor because tests showed that it provides the best performance on the street.
Last but not least S&S SH engines are equipped with S&S Super Stock ignition systems. All these features result in Shovelhead engines with the kind of quiet power that some folks may just have a hard time believing.
more … 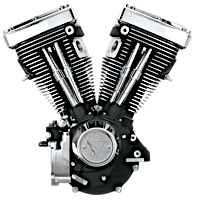 S&S V80-Series Evo Style Engines
For those who don’t want to go “big inch”, the S&S V80 engine provides a down-to-earth performance solution. With the same displacement and physical dimensions as a stock Harley-Davidson Evolution engine, the V80 fits in a stock frame just like the original power plant, but packs a bit more punch, thanks to the S&S 508 camshaft, 585 valve springs and high flow S&S cylinder heads. The V80 is built from the same superior materials as the larger S&S performance engines, so engine life is excellent.
Available with natural aluminum or black powder coat finishes. Rocker housings and nose cone cover are chromed. Fuel and ignition systems are not included, so you can use the carburetor, air cleaner, and aftermarket ignition you may already have. The cylinder heads allow installation of stock length manifolds. V80 Evo Style engines are EFI compatible with aftermarket intake componenets and module - calibration required.
more …

When asked about a manufacturer of high performance engines, the majority of American V engine enthusiasts name S&S. The engines still power more custom bikes than all the others put together and they have always been our first choice when it comes to upgrading standard machines with extra power and performance. The sometimes quite tame standard Harleys are thus transformed into respect-inspiring muscle bikes in the blink of an eye. S&S sums it up very aptly in their motto "Proven Performance".

The typical stroker engines of the 60s and 70s were rather crude units compared to today and established a reputation of high unreliability and low durability. But that was a long time ago and S&S has made great strides in its company history, not only in terms of performance, but also in reliability and mileage.

Double the power with longevity same as stock - is this possible?

Unfortunately, the performance depends on which restrictions - depending on the country - must be observed for the air filter and exhaust system, so as not to attract too much attention from the "authorities". Lifetime is also possible, the materials used give that. Who restrains himself during the running-in and prepares the engine for its years of service with understanding, and then demands the S&S engine like every other only then correctly, if it was driven properly, is on the best way to long durability. Answer to the question in one sentence: Buying a factory assembled S&S engine is in our opinion the safest way to achieve this goal.

How do I know that I have a true S&S engine?

All complete engines come with a certificate confirming that it is "The Real Thing". If this certificate is missing, it should be assumed that the unit was not assembled at S&S in Viola WI, USA.

Are there spec sheets of the power available?

No, there aren't any. The power output of the individual engine idepends too much on parts such as the air filter and exhaust. If you need performance data for certification, you have to go to a dyno. Anyone who needs the displacement for the tax may look in the certificate.