A W&W Cycles brand. Born out of the W&W Special Branch for everything fast. The brand stands for parts and accessories with R factor: R as in racing, rocket science, roaarr! It's for all bikes in the Old School bracket. If it says Wrecking Crew on the label, the contents is the wild, early years of the Milwaukee motorcycles.

Products by Wrecking Crew in our web shop: 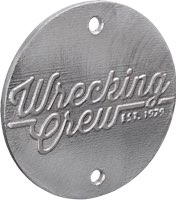 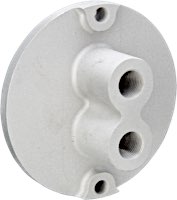 Wrecking Crew Generator Block-Off Plates with Spark Plug Mounts
Back in the days it was common to carry a set of spare spark plugs easily accessible on the motorcycle. Thus in case of a necessary change you didn’t have to dig them up deep from the bottom of your saddlebags. These block-off plates with two threaded sockets derive from the race track and are intended for magneto equipped bikes without generator. They simply install in lieu of your genny and bolt down with the stock hardware.
more …

Wrecking Crew Tramp I Handlebars
The shape of these handlebars is inspired by the legendary Tramp I, a Knucklehead drag bike built by S&S founder George Smith in the early Fifties. They feature distinctive, pulled-down tube ends. This feature helps so much when crouching down on the tanks during your quest for top speed. The selection includes handlebars for stock spiral grips thru 1948 and handlebers which feature straight 1” tubing on both ends so they will accept 1974-up grips and clamp type throttle controls.
more …

Wrecking Crew DIY Mid Brake Control
Mid position brake control which was designed for rigid frame Big Twins with mechanical rear brake. It positions your foot approx. 25 cm towards the rear for a more sporting seating position and positive control of the bike during hard acceleration.
This DIY kit includes a loose rear mounting stud which must be welded on. Thus it can be fitted to all stock or custom frames. Pedal stud and pivot are positioned for stock 1958-1969 pedals, however, other existing brake pedals can be modified and used, too.
more … 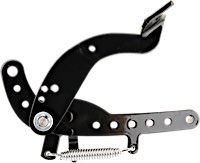 Wrecking Crew Bolt-On Mid Brake Control
Mid position brake control which was designed for rigid frame Big Twins with mechanical rear brake. It positions your foot approx. 25 cm towards the rear for a more sporting seating position and positive control of the bike during hard acceleration.
The bolt-on kit has a black powder-coated finish and comes with prake pedal and return spring. It installs easily provided the frame brackets are in their stock position.
more …

Wrecking Crew Oil Cooler and Filter
Oil cooler and filter combination which ideally fills the empty space on custom generator/alternator engines. Of course it can also be installed in lieu of the generator on all HD motorcyles which were factory outfitted with such a device and don’t require a permanent charging system, e.g. magneto equipped motorcycles.
more …

Wrecking Crew Sweaters
Back in the days when Knuckleheads, Flatheads und Panheads were new machines a club sweater was indispensable biker outfit. Our Wrecking Crew sweaters are hand crafted from start to finish. They are made from extra heavy 100% worsted wool knit and feature a Talon turtle zip. The distinctive wide knit cuffs and waistband keep out wind and cold and prevent riding up of the sweater. The elbows are reinforced with interior patches
more … 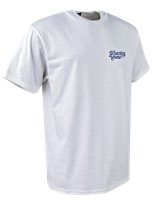 Wrecking Crew T-Shirts White - Red+Blue Print
High quality white cotton T-shirts with Wrecking Crew est. 1979 logo on chest and back. This is the AMF version with the highly official red and blue of the American flag on white shirt. Made from 100% best, most comfortable, heavy duty cotton.
more … 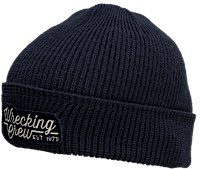 Wrecking Crew Watch Caps
You simply can´t live without it anymore once you added this watch cap to your personal gear. Our Wrecking Crew watch caps are made in Oregon, USA. 100% wool knit in excellent manufacture that will last, guaranteed. It features a Wrecking Crew logo sewn on the turn-up. One size fits all.
more … 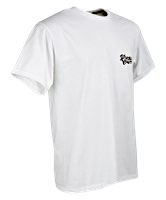 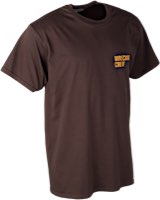 Wrecking Crew T-Shirts Chocolate
Preshrunk T-shirts with Wrecking Crew logo on back and chest are made from cotton.
more …

Wrecking Crew Caps
High quality 5-panel caps which we have made in the USA. They sport an embroidered Wrecking Crew est. 1979 logo, a curved visor and come with velcro closure, so one size fits all heads.
more …

Wrecking Crew Hoodies
If you look for a top quality hoody, you just found it. We have these Wrecking Crew hoodies made from rugged 60% cotton and 40% polyester fabric. They feature a full front zip, Kangaroo pocket and are waffle lined for improved comfort and warmth. With embroidered Wrecking Crew logo on the back and left chest.
more … 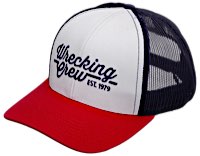 Wrecking Crew AMF Mesh Caps
For hot summer days. Mesh style cap in the AMF version with the highly official red and blue of the American flag. Featuring slightly curved foam bill which sports the Wrecking Crew est. 1979 logo. The rear section is made from plastic mesh for optimal breathability. An adjustable snap closure ensures that one size fits most.
more … 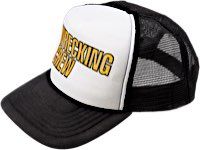 The Mud of no Return
What on earth can persuade four grown men to ride their V-twins to a place where for decades gazillions of mosquitos, free range guerilleros, sinister paramilitary, paranoid drug runners and desperate indigenous people have been doing their level best to prevent Panamericana’s last missing miles being built. Some call this white area on the map the ‘Darien Gap‘, to the Four who went there it is the mother of all roads, the Mud of no Return. What they did was to try and to close this last gap in the road connecting the two Americas. They were using Milwaukee machinery, mildly modified using stuff from the W&W Cycles shelves. The ride included police encounters, homicidal truckdrivers, lousy hotel beds, stampeding cockroaches, DIY river crossings, tropical downpours, Panama beer and forcibly removed distributors, and ended – in the mud. Mud beyond all imagination. Mud, so bottomless that only a four wheel driven Big Foot truck could rescue the intrepid riders. A specimen of this mud of muds is still sitting in a climatized W&W safe, a warning to the world that no road is so pitiless as the Mother of all Roads, the Panamericana.
more …

The Other End of the Road
CUBIC INCHES AND CLARITY IN THE ARCTIC. The world all of a sudden gets clear, translucent and clean at 40 below. Only your own eyes are foggy with the exhaust of two Harley-Davidsons on the ice road, that on milder days as the Mackenzie River flows peacefully into Beaufort Bay. Up there, at Tuktoyaktuk, North West Territories, Canada. This book is a shot at trying to bring home some of the feelingS of riding two Harley-Davidsons in 2008 over ice roads to one of the most northern points on the American continent that can be reached with ROADGOING vehicles. Without getting into a well known situation round here: "Don’t get stuck in Tuk!“
Doing it can be a lot of things, but it isn’t half as dangerous as some people would like you to believe, given a certain amount of planning and preparation. And it wasn’t the first time, that W&W Cycles went out of everyones way to ride roads no one usually cares to call roads.
In 1995 it was the MUD OF NO RETURN. The Panamericana Highway between Panama and Colombia. The Problem: a gap in the road. Not any ole pothole, but the infamous Darien Gap. The attempt to cross 70 miles of trackless jungle on two specially prepared rigid framed Pans and Shovels ended in bottomless mud. In 2005 we went to EAT DUST. We took four vintage Harleys down the gravel Ruta 40 to Ushuaia, Tierra del Fuego, to the southernmost beer in the world. And just there, sipping a well earned Beagle beer, the question popped up, how the other end of the road might look like. No one around knew, so we decided to have a look.
Said, done, ridden, frozen, printed. So, get your fireplace going, grab a drink and turn the page. And don’t forget: A BIKER’S WORK IS NEVER DONE. ’Cos the next road is waiting around the corner.
more …

Eat Dust
4 men, 8 cylinders, 3000 miles, no mercy!
If you thought that “Operation Panamericana” (Darién/Panama 1996) had already reached peak rpm you better shift into the next gear now. In January 2004, from the dark and oily basements of W&W, 4 enthusiast staff members on 2 Knuckleheads, 1 Panhead (Panamericana proven) and 1 Evo Sportster took off for a bone-shaking test ride.
The plan
Starting in Buenos Aires/Argentina and ending in Ushuaia the journey will lead them along the famous Ruta 40 to Patagonia and Fireland, where the penguins meet the whales...you mean this sounds like a nice weekend trip, eh? Ok, let´s take a closer look at it then: 3000 kilometers of asphalt (or what Argentinians consider as asphalt) plus 2000 kilometers of gravel roads of the type that makes your teeth want to fall out. Endless plains, bizarre mountain ranges and - wind. Wind that blows harder than the exhaust of a V-Rod on nitro.
True to the slogan ”We ride what we sell“ the four Patagonian riders sit astride the best what the W&W catalog has to offer so the 4x4 service truck can stay at home. After all, this ain´t no disco.
Sleeping?
Just lost my tent!
Eating?
Penguin meets Leatherman!
Drinking?
The world´s southernmost beer at the world´s southernmost bar!
Toast:
It‘s not the end of the world, but we can see it from here.
more … 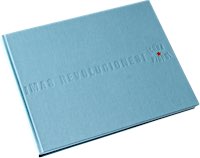 ¡Más Revoluciones!
¡QUE CUBA VIBRE! This latest idea of ours vibrated like a healthy mix of rum, Coca-Cola and lime juice. Let's go meet Paul's old Harlista friends. In Havana. Let’s go for a ride together, do some wrenching, if absolutely necessary. Let’s burn the days. We bring two W&W Harleys: The dual carb ’47 Knucklehead and the rigid ’48 Panhead.
The plan is to do some easy miles to meet Cuba's Harlistas first. Our Milwaukee tractors carry us deep into the tobacco growing country until the road just stops on a picture postcard caribbean beach. We cruise the setting sun on Malecon and greet the falling dusk in the Floridita bar, one of Ernest Hemingways favourite watering places.
The street in front of Sergio's becomes our home. We drink coffee, we chat, we do some wrenching, and there’s beer. What’s the point of bikes running like clockwork? Were not those days with Sergio the better life? Let's drink another Cuba libre to that. Oh, and go easy on the Coke. A squirt of lime juice is all it takes. ¡Vamonos!
more …

Wrecking Crew Book Set
How about some mud, dust, ice and sugar cane? Here’s some ready-made adventures for your coffee-table or fireside armchair: 4 photo books, which cover W&W’s epic rides on classic Harleys to the jungles of Panama, on Ruta 40 from Buenos Aires to Fireland, on Mackenzie Ice Road in Northern Canada and from Havana to the Caribbean beaches of Cuba. Severe side-effects like wanderlust, wrench attacks and wet Harley dreams cannot be excluded.
more …