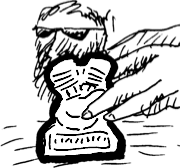 Tamiya 1:6 Model Kits
The legendary 1:6 big scale models by Tamiya which since decades delight small and big boys (and some girls). All components are incredibly detailed and once assembled the results perfectly image the original bikes. A wonderful pastime for those cold and wintery days.
more … 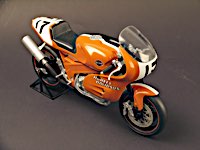 Harley-Davidson 1:9 VR 1000 Superbike Models
The increasing popularity of the AMA Superbike race series triggered HD to start development of its own weapon in 1988, but it was not until late 1993 that the first racer turned a wheel in anger in competition. The project goal was to produce Harley's first from-the-ground-up road-racer, using no existing Harley-Davidson parts. And so it happened: the VR 1000 was powered by a 60° V-Twin, water-cooled, with double overhead cams and 4 valves per head. Sounds familiar, doesn´t it? Correct, this is the exact configuration of V-Rod model engines. To homologate the bike the factory had to build 50 bikes which today are highly sought after and dearly paid for collector´s pieces. All the high hopes didn´t materialize though, and the bike generally underperformed, despite being ridden by competent racers. In 2001 the factory decided to withdraw from Superbike racing and the VR 1000 went to the archives. However, valuable experiences were gained for the development of the V-Rod model group.
This very detailed 1 : 9 scale reproduction is painted like the original works race bike in the factory´s race team colors. It features moving fork, wheels and swing arm. It is mainly built form die cast metal and stands secure on a rear wheel stand. A great tribute to a very interesting chapter of Milwaukee´s racing history.
more …