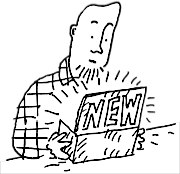 New on the shelf

Harley LiveWire @ W&W
Riding Milwaukee tractors that look like they came from a museum, a junk yard or a custom mag rarely makes us feel like pioneers.
So the anticipation was huge when we got the call from Frankfurt. "It's here!" It, that's the LiveWire by Harley-Davidson, the first ever for-real electric motorcycle by one of the established motorcycle makers. It's a huge promise by the Milwaukee Gentlemen, whose more conventional products we've been wrenching and driving on this planet's roads for over 40 years now. Just because the LiveWire is so profoundly different, as if coming from a parallel universe, than our beloved old clunkers, we were all stoked up and ordered one of them newfangled doohickeys as soon it was possible.
So we saddled up the Magic Bus and went to Frankfurt.
more …
1948 Wrecking Crew Pan
If you take a look at W&W's 1948 Panhead you can hardly imagine what a long and winding life it has led so far. We’re not sure about the first 40 years of its existence, but in the 80s it joined the W&W fleet. And whatever plans we had with it, the Pan was there to serve.

The list of the many roles it has played so far is impressive. One of its earliest duties was to shake a big plastic canister of MaiTai mixture, strapped to the then installed sidecar rig. A quick run up the hill, and when back, the cocktail had been shaken and was ready for consumption.
more …
Bates Beefy Body FX
Owning and riding a venerable Shovelhead isn't the worst way of spending the hard earned buck when you're a friend of last century's Milwaukee machinery. But, if you make the mistake to drop by at one of the custom shows in Norrtälje, Sweden, or Punta Bagna, France, not to mention Born Free U.S.A., you may catch the customizing bug. Among the galaxy of styles that populate motorcycling's deep space, between vintage AMF tanks, and home built cafe racer bum stops, between bobbed fenders and curved fender struts, king & queen seats and solo saddles you'll discover, if you look long enough, a special breed of bike parts:

The Stuff that Dreams Are Made ofWhen H-D acquired a fiberglass production facility in the Sixties Willie G. Davidson was quick to see the endless possibilities offered by the new material. In 1971 Sportsters and the all new Super Glide were offered with the revolutionary boattail seat combos. Made from, yes, fiberglass. Fiberglass, that’s ultra thin glass fibers held together by epoxy resins had been in use since the Thirties in housing and for insulation purposes. When surfboards were invented, the shapers soon discovered that fibreglass with it's ability to follow compound curves was just the thing to strengthen the balsa boards. Using the stuff for bikes soon followed. The boattail was a marketing disaster and was discontinued quickly. The few surviving examples however are all in the hands of discerning collectors.

A young dude by the name of Tracy Nelson was smarter than the Milwaukee gents. His California shop „Tracy's Fiberglass Works“, later just „Tracy“ went on to be a legend. Tracy built „monobodies“ for diverse brands and models. A monobody is a one-piece combination of tank, seat pan and rear fender, often also including side panels. The Tracy catalog was full of strange and crazy creations, kicking off a veritable fiberglass craze in the 1970s. No monobody was too crass, no paint scheme too off-the-wall. But, monobodies for Harleys were rare even then, and if you manage to find one, the condition is often rough. Fiberglass is tough, but 50 years are a long time. A leaky tank is no joke when you just spent $1.500.00 on that far out paint job. That's why there now is the Beefybody.
more …
The Bootlegger
Y’all may be forgiven to think that the only Harleys round our back porch are at least 30 years old, the older the better. Well, there yer wrong, folks. Jes' the other day we got us a mighty fine late model 883 Iron Sporty for them pesky trips to the post office, down to the station, to the lumber mill or over to the liquor store.
more …
From Shelf to Frame in 74 Steps
Just let’s assume for a minute, someone would find a 1974 Shovel frame, with papers and all, and let’s further assume that said someone a back in the good old times used to terrorize the roads on his 1200 FX Superglide. Just assuming. And this someone now had the warehouse of W&W at his disposal, just had to pluck the stuff from the shelves and the catalog respectively. Well, this someone jes' might be forgiven to get the idea in his head to re-build himself that 74 of a long long time ago. Perhaps with some minor improvements on the way too.

For starters take the engine: if you’re not the type who likes to dig through heaps of old metal or the Internet this baby is first choice: the shovelheaded American made SH Power motor by S&S. A cool 93 cu.in. Add a 4-speed Baker gearbox, Performance machine brakes … the list goes on, on and on. Scroll down for details. If you spotted the swingarm and the foot shift assembly for absence, you get extra brownie points. As it happens, we had them lying around in a dark corner. The sexy curved fender struts (hot stuff in the eighties, and virtually unfindable these days) did our Swedish friend Mathias of LeBeef by the way.

Putting it all together in our heat proof Spanish dungeons star wrencher Garci of Custom Biker in Malgrad swung his magic adjustable wrench. The only thing he steered clear of was the electrics. For testing purposes we went to Norrtälje Custom show and the summit of all custom bike events, the Punta Bagna. Result: This FX rides like a modern motorcycle.

The similarity with recent Milwaukee produce extends to the price too. It’s up to you to decide between the blessings of The Company or a Harley like no other. Which you will have built all by your-shelf.
more …
Introducing: The Leafspring-Forked Knucklehead
W&W CYCLES has always been about resurrecting and riding as fast as possible ancient Harley-Davidson machinery. A few of the dudes here have owned and ridden springer forks of all types. We even tried using ancient Indian springers on a 74 frame. Which proved to be less than satisfactory, as far as ride stability was concerned. The Harley and Indian frame geometries just don’t match up. So we decided to have our own forks exclusively built, combining interesting looks with state of the art geometry. The maker is situated in Italy; when they aren’t making our forks those guys are building replica frames for classic European bikes, which means they know what they’re doing.

The first prototype of the forks was tested under severe conditions. We had it on our rigid framed "Wrecking Crew" (which is a kind of W&W SpecOps) Shovelhead, and ran it in icy Finland, on a Canadian ice road and on Florida’s sandy beaches (big deal!).
more …