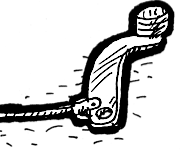 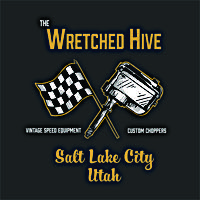 Period racing style brake pedal to replace the stock pedal and linkage on W series 45”/750 cc Flatheads. Designed to be used with a footpeg mounted to the footboard support rod or with WR footpeg bracket.

Yeah, there is stuff out there that almost looks like the real thing and costs way less. Not here at W&W CYCLES, though. If you feel like supporting product pirates rather than the originators and makers of high quality parts for your bike, fine with us. We're gonna stick with the real thing.

Authentic reproduction of the right side footpeg bracket as used on WR race bikes. Can be used on stock W series 45”/750 cc Flatheads to replace the footboard.
more …

Authentic reproduction of the clutch pedal and bracket as used on WR race bikes. Mounts to case stud and timing plug just as the original part. Can be used on stock W series 45”/750 cc Flatheads.
more …

The shape of these handlebars is inspired by the legendary Tramp I, a Knucklehead drag bike built by S&S founder George Smith in the early Fifties. They feature distinctive, pulled-down tube ends. This feature helps so much when crouching down on the tanks during your quest for top speed. The selection includes handlebars for stock spiral grips thru 1948 and handlebers which feature straight 1” tubing on both ends so they will accept 1974-up grips and clamp type throttle controls.
more …

Authentic reproduction of the rear fender as it was used by the factory on WR race bikes. With chopped off rear section and trimmed sides. Perfect for your Bobber or Scrambler project.
more …

The year 1903 not only marked the founding of our favourite motorcycle company, it also started off the Witherbee Igniter Company, which later evolved into the WICO Electric Company with the primary mission to build quality ignition systems. In the 1940s WICO produced the "X series" magnetos, which were extremely reliable and very repairable, so it is no wonder that they became highly popular on farm tractors. All John Deere tractors at that time were equipped with WICO magnetos. When Harley-Davidson came out with the special WR racing version of the 45” Flathead in 1941 they first equipped them with Edison-Splitdorf magnetos, but soon after the war switched to WICO XV1922 mags and kept them until the end of WR production in 1952. Especially during long distance races like the Daytona 200 the WICO magnetos proved superior.
Original, working WICO XV1922 mags are hard to find these days, so we are all lucky that Nassau, NY enthusiast Andrew Johnson decided to reproduce them. Incredibly accurate, meticulously machined and flawlessly working. There are no shortcuts whatsoever, these mags are perfect. Period. They install, adjust and function just like the period conterparts. Besides being replacements for WR race bikes all Flathead 1937→, all K models and Sportster →1970 can be equipped with them, where they install en lieu of the factory points ignition system. XV1922 mags feature a distributing rotor so your bike will be converted to single fire for more accurate timing and healthier sparks.
Admittedly, a WICO mag is quite an investment, but always remember: the quality will remain long after the price is forgotten (H. Royce).
more …

Authentic reproductions of the original WR gas tanks as used on the 1946-1952 production race bikes of the same name. The narrow shape and omission of the speedo assembly achieve that much sought after racy look.
more …

Standard equipment on the Flathead street racing model, the WRTT. Actually not a muffler because it has no restriction whatsoever and is therefore allowed for use on racetracks only.
more …

There is NO Substitute for more cubic inches! Boost your little Flatty up to 54 cui or 900cc and experience the change from a lame duck to an agile pony. These 4.5” stroker flywheels require special stroker pistons which are also available. Recommended for qualified mechanics only because the flywheels need to be balanced and the engine cases and cylinders must be relieved for the rods to clear.
The selection includes: