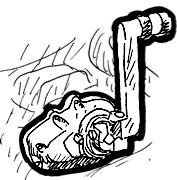 This kick starter by Cannonball is cracking down hard! For the high demands that Evolution and Twin Cam engines place on the kicker train, Cannonball has a kickstart kit that can withstand even the highest demands. The often used 4-speed components of conventional kicker kits are usually not sufficiently dimensioned for engines with high compression. The weak points have been consistently eliminated one by one and the typical causes of problems have been replaced by much stronger parts. For example, the kicker shaft has double the cross section and the starter wheel has replaceable lead-in ramps made of hardened steel. The kicker cover is made of forged aluminium. If you want a kicker that works reliably when the electric starter fails or if you have no electric starter on the bike at all, the Cannonball kicker kit is the best choice.

We recommend the use of accessory ignition systems with kicker mode.

If you have installed the Cannonball Kickstarter Kit on your bike and want to work on the inside of the gearbox, you will need this acces door puller because the conventional puller does not work on this modified bearing plate.
more …

A super strong kicker arm which has a twice as thick cross section compared to stock counterparts. Since this kicker arm is straight, make sure it´ll clear your exhaust before ordering.
more …

The kicker pedal is cast from bronze and reinforced throughout, too. It features a heat treated spindle with 5/8” diameter (stock = 1/2”) to prevent breaking.
more …