We use cookies for analytics, advertising and to improve our site. To find out more see our privacy policy.


>
DON'T MESS WITH TEXAS


Everything's bigger in Texas. Even the fear that your own motorcycle is lacking a few cubic inches. So, they get creative in Texas.

And ever since Bob Obenberger, of Fort Worth, Texas, got famous in the Fifties for his mammoth stroked Knuckleheads, the term „Texas Stroker“ had been established for Harley-Davidson Knucklehead based strokers.

Our man for the really old clunkers, Paul Jung, always fascinated with motorcycle history, and obsessed with old Harleys, had decided that he wanted to build such a „Texas Stroker“ engine of his own. Long before him, in the 1930s, dudes hungry for engine displacement hopped up their already powerful Knuckleheads with a few extra cubic inches – without today’s over-the-counter kits and without DIY tutorials on YouTube. Paul, like them, did everything himself. Because he wanted to. And because he could.

If we remember correctly, "stroker" means increasing the engine’s displacement by lengthening the stroke (that’s the length of the piston’s up-and-down motion), while the bore stays unchanged. But where to find that added stroke? And how do you end up with the correct compression ratio, to use all that added displacement efficiently?

Now, not everyone has a basement full of Knucklehead parts and the experience to embark upon such an expedition into the almost forgotten, but, Paul had, and he did.

What would an enthusiastic, racing-oriented Knucklehead rider do at the end of the 1930s, when he noticed that the measly 61 cu.in. of his newfangled OHV twin were way less than the humongous 74 or even 80 cu.in. of the Flathead models? OK, they had more power, but seriously, less displacement? In a brand new motorcycle? No way!

But: there were no aftermarket stroker flywheels or big bore cylinders available off the shelf, which he could buy at his Harley dealership or custom parts shop, like we are used to do today. Well, he had to get creative and be a good motor mechanic or at least know one.

Those who had done their homework had soon found out, that the new Knucklehead motor had a stroke of 3-1/2”, and the big U-series Flatheads had a stroke of 4-9/32”, with both having the same bore of 3-5/16”. It didn’t take a rocket scientist to figure out the potential in this. Hooray! – here we go! An increase of displacement to 74” or 1200 cc, combined with extra torque produced by the longer stroke (+ 25/32” to be exact), all topped with overhead valves seemed possible. Just what the doctor had ordered.

But wait a minute. Wouldn’t it even be possible to bore the thick walls of the 61” cylinders to the 3-7/16” bore of the ULH Flatheads? It sure was, and that made for another 5 cubic inches, so the beast could be beefed up to 79” or 1294 cc. Holy cow!

Now you only had to sweet-talk the guy at the used parts counter into letting you have a used set – there were no swap meets either in those days – or fork out for a set of new U-model flywheels.

All that was left to do was exchange the flywheels in your crankcases for the new ones, optionally bore out the cylinders, and then make your buddies with their stock Knuckleheads or Indian Big Chiefs eat some dust at the next weekend meet.

Fast forward to 2019. In Paul’s basement a set of Knucklehead crankcases, consisting of an original 1938 right side and an aftermarket left side plus a pair of U-model flywheels, had been collecting dust for years, together with the grand plan of building a period correct stroker motor out of these parts.

However, when a front 1938 small port Knucklehead cylinder head popped up at the Technorama jumble in Ulm, and a matching rear sibling was spotted on ebay, finally, the project began to pick up speed.

Swap the flywheels and go! Well, as every wrencher can imagine, it’s not quite that easy. 61” OHV flywheels have a diameter of 8-1/8” and 74”/80” Flathead wheels are 8-9/32”, so the latter don’t drop smoothly into early Knuckle cases. You have to machine the crankcases or turn down the U-model flywheels. In our example, it was decided to mill the cases and keep the weight and torque of the Flathead flywheels. Besides, the non-factory-matched case halves had to be machined anyway.

Time to plan for pistons. In the early days most mechanics used stock OHV pistons. However, their skirts are too long and compression height doesn’t match either, so you have to shorten the skirts and install compression plates. The disadvantage of stroker plates is that your manifold will be too short and will require attention and to avoid this, back in the days, some wrenches used repurposed pistons from cars, or even home made versions (casting pistons in one’s garage wasn’t unheard of then). Paul took the luxury of grabbing a set of S&S forged stroker pistons from the W&W shelves. There’s still a lot left to do anyway, because both piston options will be lighter, so rebalancing of the flywheels is mandatory.

After balancing, the flywheels, shafts and rods are ready for assembly. As a bow to our gearhead colleages of the era Paul used a two-piece pinion shaft as it would have been done in 1938. Also, he had a couple of them lying around :) As long as the two-prong connection is tight and precise it will work just as it did back in the day. Next step: install the whole assembly into the crankcase and fill the gear case with an original cam and all the other necessary components. A nice stock cover closed the basement.

Lacking original 4-fin cylinders (call us if you have a pair!), a set of 1941 jugs of the 61” type was used, bored to 3-7/16”. Once these were installed together with the pistons, building the second floor was put on the agenda.

Nothing fancy here. The cylinder heads were rebuilt to stock specs, with new valves, guides and springs, covered with original tins. After this, they were bolted to the jugs, which is straightforward just like building a stock engine. A Linkert M5 carburetor, which was MoCo equipment for Harley Knuckleheads from 1936-1939, mounted on a 3-bolt „baby butt“ manifold, is taking care of just the right mix of gasoline and air .

All that is left to do now is to install pushrods, covers and an ignition system, and the 80 cu in Texas Stroker will be ready for action. Stay tuned for part II of this story when the engine will be powerplant of a motorcycle to be built and added to the Wrecking Crew fleet of Milwaukee tractors. 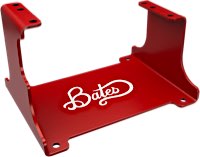 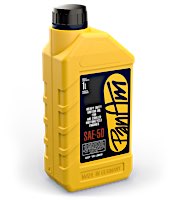 PanAm Oil SAE 50
Our traditional single grade lubricant for engine and transmission for heavy thermal and shear loads. Complies with H-D recommendations up to 1984 for Big Twins and Sportsters up to 1981. This high performance lubricant complies with API CF.
more …