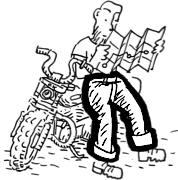 In order to get the most mileage out of your Pike Brothers Mechanic Bibs we strongly advise to follow the washing instructions that come with the pair of trousers.

A pair of braces have been the true companion for a pair of work pants since the middle of the 19th century. This is why Pike Brothers makes its own Heavy Duty braces for the Roamer Pants. They are hand made to the highest quality standards. One size fits all:<br /><ul><li>“Dutch” construction with 45mm wide Straps</li><li>Leather parts made from heavy weight, hand cut cow hide leather, </li><li>Pike Brothers Logo embossed in back yoke</li></ul>
more …

The 1937 Roamer Shirt is based on an authentic American work-shirt from the late 1930s. The regular fit in combination with the brushed flannel fabric offers a high level of comfort especially for summer times, when it’s hot. Like the original, it features an asymmetrical left pocket, which is called a smoker’s pocket. It is cut in such a way, that you can stash a soft cigarette pack into it and still be able to draw a single cigarette without taking out the whole pack.
more …

Pattern for the 1954 Utility Shirt was an authentic vintage Tee with button front and a slim fit. These shirts were meant to be worn underneath, which explains the slim fit, but of course they look just as good if worn on the outside. Made from 100% cotton jersey fabric which is fleeced on the inside for high wear comfort.
more …

The design of the Ranger Belt was adopted from a cinching technique used in horse tack that allows a strap to be tightened without pinching the horse's hair in the buckle. The Texas Rangers adapted this technique into the design of a belt in the 1840's, when they began using the new Colt Walker six-shooter, which used holsters that required wider belts. Therefore, this belt style of two-layered leather in the front is named after the Texas Rangers.
Made of Horween Dublin leather, a cow leather which is known for its stability and lightness. Among experts it is the perfect leather for belts, purses and bags. It is vegetable tanned and then treated with a recipe of oils and emollients thats been used for more than 100 years. The infused oils give this leather a rustic character and different color variations.
more …

The W&W Genuine Wear T-Shirts made from 100% cotton, heavy 180 g/m2 fabric quality, with your choice of many different “messages" on front and W&W Pan/Knuckle/Shovel Logo on the backside.
more …

You probably just found the last leather belt you will ever buy because Galco leather belts will outlast the usual department store stuff many times over. For good reason many a Police officer in the US entrusts the holster of his 357 Magnum or 38 Special to a Galco belt. They are made with premium vegetable tanned steer hide, selected from the top 3 percent of the hides available and will retain their look of stylish distinction through many years of wear. Each belt is burnished, polished and hand-finished in the way that defines Galco's unsurpassed quality and craftsmanship.
The SB5 Sport is a 1-3/4" (45 mm) wide, leather lined holster belt which is made with premium saddle leather. Includes solid brass buckle.
more …

The lousy weather version of the Stetson Hatteras flat cap. Handcrafted from high quality waxed cotton (100%) fabric, which is water-repellent. Features an elaborately sewn eight panel top and a 75% cotton lining and band for a perfect fit. The visor is pre-bent and the backside sports a Stetson logo button.
more …