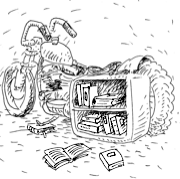 "And then the run was on. Outlaw motorcyclists rolled in packs toward their annual July 4th outing, a time for sharing the wine jug, pummeling old friends, and generally terrorizing the populace".

Hunter S. Thompson spent one year preparing for this book in close quarters with the Hells Angels and their president Ralph "Sonny" Barger. Thompson was up front with the Angels about his role as a journalist, a dangerous move given their marked distrust of reporters from what the club considered to be bad press.

Far from being wary of this outsider the Angels were sincere in their participation, often talking at length into Thompson's tape recorder and reviewing early drafts of the article to ensure he had his facts straight. Thompson remained close with the Angels for a year, though ultimately the relationship deteriorated when several members of the gang gave him a savage beating or "stomping" over a trivial remark made by Thompson.

This book is - even more so today - a broad comment on the modern tendency to violence and sensationalism. It is also one of the first examples of the participatory "gonzo" journalism that Thompson perfected.
Item №
Version
net price*
unit
Availability in warehouse Germany

The crazy tales of HST’s "coverage" of a Honolulu marathon event that ends up being a wild ride to the dark side of Americana. The Curse of Lono features all of the zany, hallucinogenic wordplay and feral artwork for which HST became known and loved. It complements the fury of Thompson's writing. It is pure visceral madness and stakes its claim with any of his best works, nothing short of what those of us who care have come to know as life-blood joy and the frenzied understanding of more than a few generations of enlightenment.
more …