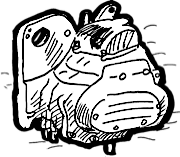 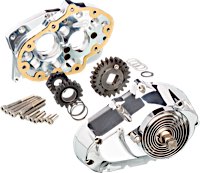 Cannonball Kickstarter Kit
This kick starter by Cannonball is cracking down hard! For the high demands that Evolution and Twin Cam engines place on the kicker train, Cannonball has a kickstart kit that can withstand even the highest demands. The often used 4-speed components of conventional kicker kits are usually not sufficiently dimensioned for engines with high compression. The weak points have been consistently eliminated one by one and the typical causes of problems have been replaced by much stronger parts. For example, the kicker shaft has double the cross section and the starter wheel has replaceable lead-in ramps made of hardened steel. The kicker cover is made of forged aluminium. If you want a kicker that works reliably when the electric starter fails or if you have no electric starter on the bike at all, the Cannonball kicker kit is the best choice.
Fitment hints:
more …

Standard Kickstart Kit
Complete Heavy Duty kickstart kit for all models with 5-speed transmission from 1987–up. Fits also pre-1987 transmissions if the 1987-up clutch release mechanism is retrofitted. Bikes built 1991 - up require two release pushrods. Avoid situations at midnight, in the middle of nowhere with a weak battery and no kickstarter because this means: push-starting or just pushing. Besides - Harleys should always have a kick starter.
more … 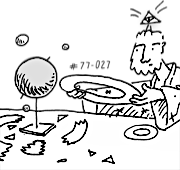