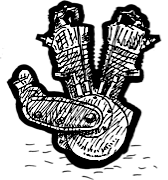 Your old IOE machine will benefit from a performance cam, too, especially when combined with a later style 1-1/4” or 1-1/2” Linkert carburetor. Higher lift lobes and longer duration will improve breathing and easily free some extra ponies. The W&W Wrecking Crew tested this cam shaft in a 1929 JDL and the results were highly satisfying, with overall performance nicely improved on both public roads and occasional race track missions. Excellent European made quality.

As with all high lift cams tolerances inside the gear case need to be diligently checked.

Today little known but back in the days a celebrity, Paul Weyres (1900-1984 in Aachen, Germany) was a famous German motorcycle and sidecar racer, in the pre-WWII era. He was a four time Sidecar Champion between 1931 and 1934 and started in more than 400 motorcycle races during his career, of which he won over 100.

Paul Weyres came from a merchant family and ran his own grocery store in Aachen until the end of his life. His passion, however, was racing and he made his debut as a 23-year-old. Just a few years later, in the summer of 1927, the talented young man took part in the inaugural race of the Nürburgring, on a Harley-Davidson of course. Very soon he was supported in his ambitions by the Visé brothers, the local HD dealer and importer, and by Continental AG, the well-known tire manufacturer. Due to his numerous successes, he was invited to Milwaukee/USA in 1929, where he spent 7 months in the Race Department and returned to Germany in 1930 as an official member of the Harley-Davidson factory racing team with three racing machines tailor-made for European races. From then on, equipped with top material, began an unprecedented career with numerous successes, including international ones.

After the National Socialists took power in 1933, Paul Weyres came under increasing pressure, as the new rulers naturally did not like to see Germany's best-known motorcycle racer competing on a foreign make, and an American one at that. Until the beginning of the war, however, he cleverly managed to circumvent these reprisals and, even after an import ban was imposed on Harley-Davidson motorcycles in 1935, still managed to procure a 1937 Knucklehead via Holland and race it. When the NSKK finally forbade him to start with foreign machines, he joined forces with the designer and artist Ernst Neumann-Neander, who developed so-called Fahrmaschinen. These were small three- and four-wheeled cycle cars, i.e. a mixture of motorcycle and car. Under the hood of the four-wheeled version for Paul Weyres was, we guessed it, a 61”/1000cc Knucklehead engine. With it he competed, quasi incognito, 1938/39 still some races.

In the end, however, the World War ended the career of Paul Weyres. What remains, is the fact that, measured by his race victories, he is by far the most successful racer of all time on Harley-Davidson machines. A success story that is unfortunately not appreciated in the factory to this day.
Item №
Version
net price*
unit
Availability in warehouse Germany