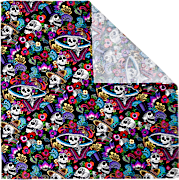 A selection of bandanas by the US shirt manufacturer Rockmount. Distinctive designs on pure cotton fabric. Machine washable.

The Moc Toe is modeled after the original work boot styles that made Red Wing famous. It is made from finest Oro-iginal leather, tanned without pigments added during the finishing process and thus achieving this warmish color tone. It is 6" high and features classic moc toe style, Vibram lug sole, triple stitched seams and Goodyear welt construction.
more …

Back in the days when Knuckleheads, Flatheads und Panheads were new machines a club sweater was indispensable biker outfit. Many of the original motorcycle club sweaters in the 1930’s and 1940’s were made by Dehen, and it is the only original US manufacturer that has survived to make the same sweaters today. Just like in the past Dehen sweaters are hand crafted from start to finish. They are made from extra heavy 100% worsted wool knit and feature a Talon turtle zip. The distinctive wide knit cuffs and waistband keep out wind and cold and prevent riding up of the sweater. The elbows are reinforced with and interior patches
more …

The design of the Ranger Belt was adopted from a cinching technique used in horse tack that allows a strap to be tightened without pinching the horse's hair in the buckle. The Texas Rangers adapted this technique into the design of a belt in the 1840's, when they began using the new Colt Walker six-shooter, which used holsters that required wider belts. Therefore, this belt style of two-layered leather in the front is named after the Texas Rangers.
Made of Horween Dublin leather, a cow leather which is known for its stability and lightness. Among experts it is the perfect leather for belts, purses and bags. It is vegetable tanned and then treated with a recipe of oils and emollients thats been used for more than 100 years. The infused oils give this leather a rustic character and different color variations.
more …