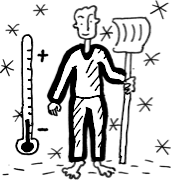 During decades of riding in all kinds of weather W&W Cycles staff members have tried nearly all types of clothes designed for motorcyclists and for every different situation there is something on the market which suits perfectly or at least comes close. However, when it came to cold weather underwear none of the tested products proved to be something you would recommend for the next Elefanten-Treffen or Crystal Rally. Functional underwear sold through outdoor and climber shops simply doesn´t do the job because it is made for people who move but bikers don´t move (almost) on their bikes, so their underwear has to carry out a different task. Then came the day when we tried Ullfrotté underwear by Woolpower from Sweden and now we have something to recommend...

Ullfrotté is the material developed by Woolpower in Östersund in the early 1970’s in collaboration with the Swedish military, scientists, doctors and survival experts. The textile is highly wear resistant and consists of fine Merino wool, polyamide/polyester and air. Products manufactured using Ullfrotté Original are sold today under the brand name Woolpower.

Thermal clothes worn next to the skin have two main tasks: insulation and maintaining the thermal balance, i.e. protecting against cold and transporting away moisture.

A wool terry fabric contains up to 80% air that is trapped by the curly fibres. The air forms an insulating layer above the skin and prevents the heat being lost. The air that is also trapped in all the loops of the terry gives a double thermal effect. Woolpower has the highest insulation values, protecting against both heat and cold.

Garments in Woolpower are not only warm but also transport moisture away from the skin, allowing vapour to pass through the wool fibres without them losing their warming function. The ability to transport moisture makes it easier to lose heat during physical activity and keeps the body dry and in thermal balance. Woolpower’s design also allows excess heat to be ventilated out through an adjustable opening in the neck.

Tests show that the ability of wool fibres to absorb and neutralise bad odours is far superior to other textiles. Wool’s chemical composition means it can neutralise substances from the body that cause bad odours. This is a big advantage when the clothes are being worn with limited opportunities for washing.

Start with the layer next to the skin. Choose base-layer garments in Woolpower 200 g/m². In intense cold supplement them with mid-layer garments in 400 g/m² (Socks up to 400 g/m²). The shell garment is worn on the outside and should protect against wet and wind without being so non-porous that condensation forms on the inside.
Item №
Version
net price*
unit
Availability in warehouse Germany

This two-piece rain suit comes with a jacket which features a full-length zipper with Velcro storm flap, two large outer pockets with gusset expanders and a soft corduroy inner collar with hood. An elasticized waist and adjustable cuffs with Velcro tabs keep the wind and cold out. The pants feature an elasticized waist band and cuffs with 12" zipper gussets for easy boot entry. Reflective striping on both jacket and pants provide safety for riding at night or in conditions with low visibility.
more …

Rain boot covers with rubberized 1/2 sole for strength and durability. They will cover your shoes or boots to protect them from rain and dirt. The reflective binding helps with night visibility. Available sizes: