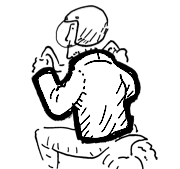 The Jacket, Combat, Winter as it has been officially called by the U.S. Armed forces came into service in 1941. Originally it was a set consisting of lined hat, a lined bib and a lined jacket for winter. However, due to its functionality and casual look the jacket was soon favored by all members of the armed forces. Especially officers were keen of wearing it because it was warmer, more casual and more practical than any other military jacket that was in service in 1941. After the war it was one of the most copied designs due to its wide range of uses. Today, original Tanker Jackets are highly sought after items and can cost small fortunes if you can find one. The Pike Brothers 1941 Tanker Jackets follows a typical period example which had been privately tailored for and worn by an officer. This version has a thicker wool blanket lining and does not have the bi swing back or action back giving it a sharper appearance. With authentic 1940s Talon zipper, left opening, 2 chest pockets, one inner pocket and genuine tube knit wrist cuffs. On the bike this your jacket for shorter trips, especially on days when the air is chilly.

The 1937 Roamer Shirt is based on an authentic American work-shirt from the late 1930s. The regular fit in combination with the brushed flannel fabric offers a high level of comfort especially for summer times, when it’s hot. Like the original, it features an asymmetrical left pocket, which is called a smoker’s pocket. It is cut in such a way, that you can stash a soft cigarette pack into it and still be able to draw a single cigarette without taking out the whole pack.
more …

Pattern for the 1954 Utility Shirt was an authentic vintage Tee with button front and a slim fit. These shirts were meant to be worn underneath, which explains the slim fit, but of course they look just as good if worn on the outside. Made from 100% cotton jersey fabric which is fleeced on the inside for high wear comfort.
more …

In 1967, Ed "Big Daddy" Roth, car and motorcycle customizer and father of Rat Fink, launched the Choppers Magazine, the first true custom bike magazine. It featured wild choppers and the first paintings by David Mann. Unfortunately, the magazine was discontinued by Roth in 1970 and the first Easyriders magazine was launched. In 2018, former WRENCH editor Cary Brobeck decided the world needed a Choppers Magazine comeback. He was to be proven right, and involved all his Easyriders Magazine friends after that venerable magazine gave up the ghost.
Today, Choppers Magazine still covers the best custom creations, current road trips, artists in the scene and events. An important part of custom motorcycle history has now come back to life with this magazine.
more …