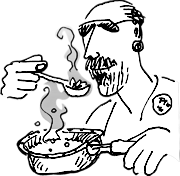 Greasy Kulture started in 1999 as an obsession and a love for the aesthetics of yesteryear, from the early motorcycle clubs that sprang up on America's west coast after WWII to the choppers and crazy customs of the 1960s. And today the publishers’ passion for old motorcycles and a life on two wheels is greater than ever. GKM is an independently published magazine about traditionally-styled old choppers and bobbers and yes, occasionally cars – from around the world: the USA, Europe, Japan, Australia and from as far away as Java and Malaysia. It is published six times a year.

Timeless, cool, and comfortable design with raglan sleeves, made from light cotton.
more …

The Knucklehead model has an enormous importance for the motorcycling sport in general and for the Motor Company in particular. It is an outstanding example of American engineering. In 1936, in times of an economy suffering from the Great Depression, the four founders had the courage to come out with an OHV motorcycle that soon should become a milestone in the history of Harley-Davidson. Model year after model year this book describes the detailed technical development of the Knuckleheads. Excellent picture material complete the information provided and make this book a most useful source for both restorers and enthusiasts.
more …

The O-Dog pants are the unquestioned classic work pants by Dickies which stands out with nearly indestructible material and a sharp crease which will last as long as the pants. It features two front pockets, one rear pocket, metal ratcheting zipper and a mini woven logo patch on the back. Order it one size larger than usual so it´ll fit as it is supposed to. Fabric: 65%polyester/35% cotton.
more …