Products by T.P.P. in our web shop: 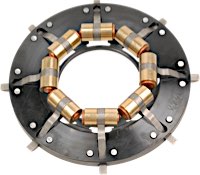 T.P.P. Centrifugal Weight Assisted Clutch Pressure Plate
Easy on the hand with smooth engagement combined with no-slip performance at full throttle, high rev take-offs - these are guide lines which are not easy to meet for a clutch system. While modern bikes perform satisfactory in stock configuration, they soon reach their limits with increased engine potential. A 124 cui. S&S powerplant literally smokes the original clutch or requires clutch springs and lever pulling efforts that only some Arnold Schwarzenegger would find acceptable. This problem goes to extremes in drag racing and that´s exactly where they developed a brilliant device to fight it: The variable pressure clutch.
Its principle is an array of weighted levers on the pressure plate which increase pressure on the clutch pack due to centrifugal forces when the engine revs up. Clutch slippage is made nearly impossible with this set-up. The drawback is that pure variable pressure clutches are not suitable for street riding with its varying traffic situations. The Japanese T.P.P. pressure plates so-to-say combine the best of both worlds: conventional clutch actuation supported by a variable pressure type pressure plate. The big advantages of this combo are that much lighter diaphragm clutch springs can be used for up to 50% easier lever effort and the weighted levers increase pack compression up to 60% for zero loss of engine performance through slippage. The kits show the best combination of low lever effort and secure clutch pressure for the respective model/engine group. Patent protected in Europe.
more … 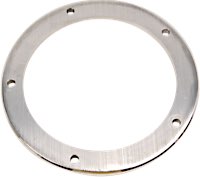 Derby Cover Spacers for T.P.P. Pressure Plate Assembly
When installing a T.P.P. variable pressure clutch, some 1998→ models 1998-up with 5-bolt derby cover may have clearance problems. This requires removal of the reinforcing ribs on the inside of the derby cover or installation of a special spacer.
more …