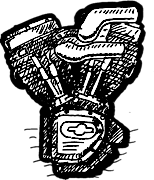 Knucklehead - the name describes a true legend and this engine design is without a doubt one of the important milestones in the history of Harley-Davidson. Introduced in the year 1936 the ohv-engined models in short time became synonyms for sporting, fast and reliable touring machines. Economically this layout proved to be a huge success for the Motor Company, too, because brand followers - and many others - quickly realized the outstanding qualities of this motorcycle. Design and technology of the Knucklehead turned out to be supremely sound and it became the prototype of all Milwaukee Big Twins, which significantly influenced all successive model groups down to the present day. The KN-Series engines by S&S closely resemble the appearance of a stock Knucklehead engine. However, numerous reforms enhance power, engine life, and reliability. The main improvement in design is the 1958-65 style flywheel assembly, which uses a splined sprocket shaft and a Timken sprocket shaft bearing on the drive side. This increased flywheel stability and strenght became necessary to handle the significantly increased power development. The rocker arm cover “tins” are another modern improvement. They are made from die-cast aluminum, and instead of being held in place by the valve guide, they are held down by valve spring pressure. A special gasket on the bottom of the lower “tin” provides a positive seal, and is much easier to service if needed, since the valve guides do not have to be pressed.

Ask American V-Twin enthusiasts to name one manufacturer of high performance engines, and nine out of ten will say S&S! And you gotta‘ wonder about the one guy who didn’t. S&S is the largest manufacturer of engines for the V-Twin high performance aftermarket. S&S engines power more custom V-Twins than anyone else‘s, and they have always been popular as a high performance upgrade in stock motorcycles. What could be simpler? Take your old engine out, and put a new S&S engine in. It’s just that simple, and you have a sleeper hog that will run the wheels off the competition. The reason that S&S engines are so popular can be summed up in two words: „Proven Performance“.

Reproductions of stock H-D generators 1958→ with matchless build quality. The connections between armature winding and commutator are spot-welded instead of being soldered, for a more positive and longer lasting bond. The insulating material of the armature is genuine maple hardwood, instead of the usual paper insulation. These generators are 100% reliable wherever the road leads you.
Our custom generator has an integrated regulator which makes a separate external regulator, regulator mounting bracket, and the associated wiring obsolete. This helps to clean up the bike considerably.
The generator cases have 4 instead of the regular 2 mounting holes for the end bell bearing support plate/brush cover assembly, so the regulator's cooling fins can be aligned either horizontally or parallel to the cylinder fins.
more …

Our traditional multigrade engine lubricant for all year round usage, suitable for heavy loads. This high performance lubricant complies with API SL.
more …

The classic look of the 32E generator and the more dependable technology of the later two brush generator - you can have the best of both worlds with these The Cyclery 32TC powerplants. On the outside they sport the typical 32E features like rounded brush covers with slotted hardware, riveted-on terminal plate and a bicolor, cast iron/aluminum housing. The inside, however, hides all the bullet-proof tech features of the later 58/65A generators, manufactured for us by Cycle Electric/USA. Now you can ride your old Knucklehead or Flathead to the end of the world and back with peace of mind.
more …

Seems it never rains in Mexico … PanAm SAE60 - the official oil of the El Diablo Run 2019 on Baja California, where temperatures above 30 degrees are standard and requirements for the engine lubricants are demanding. But thanks to global warming in Europe, too, the thermometers literally point far north in summer. For our old air-cooled machines this spells significantly more strain, which has to be considered when selecting your engine oil. PanAm60, developed by PanAm Oils in Ohio/USA, meets the increasing demands of vintage and classic bikes, today and in the future.
more …

These genuine Morris classics are for purists and feature a simple built-in auto advance and manual retard to prevent nasty kick-backs. Easy installation without fin grinding or smashing in pushrod covers. An O-ring on the drive shaft tube prevents oil leaks. Choose from a bare, machined finish or with the mag head bead-blasted, which gives the MM74E a period cast aluminum look.
more …

Our traditional single grade lubricant for engine and transmission for heavy thermal and shear loads. Complies with H-D recommendations up to 1984 for Big Twins and Sportsters up to 1981. This high performance lubricant complies with API CF.
more …