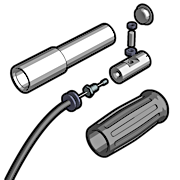 Complete kit of throttle and spark controls for all springer fork handlebars 1935-1948. Includes all parts for an accurate restoration of internal and external components.

These grips were factory equipment in the years 1935-48 but fit all models thru 1973. Custom versions for handlebar and throttle assemblies 1974-up are also available.
more …

These kits include all stock replacement parts which are essential for the restauration of your internal throttle and timer control plungers. Each kit includes rollers, pins and other small parts as pictured.
more …

Perfect reproduction of the handlebar end screws used on models from 1922-1948.
more …