We use cookies for analytics, advertising and to improve our site. To find out more see our privacy policy.

Home
>
Shop
>
News and Specials
>
Company Portraits
>
Bell Helmets
NOT RETRO. ORIGINAL.

Back in the Fifties a certain Roy Richter was busy selling auto parts from his backyard garage in Los Angeles, California on the fringes of the ever accelerating Hot Rod and car racing scene. The cars got faster and faster, but the risks and the accidents were growing as well.

So in the year 1954 he did the sensible thing and started producing a decent fibreglass helmet, named Bell 500, as in Indy 500.

And that's exactly where one year later the Bell 500 took part in its first ever race. Carl Niday strapped it to his gourd, hit the throttle, and 170 rounds later the wall. Hard. Miraculously he survived the crash, which he put down at least in part to his new helmet.

Small wonder that Bell helmets achieved a sort of gold standard status in safety, more so after in 1966 the first full face helmet was introduced. From then on, Bell couldn't go wrong. In 1971 all 33 drivers in the USAC 500 series (Indianapolis, Pocono and Ontario) were wearing helmets with the Bell logo.

The by now famous helmets were protecting many famous heads: fast Hollywood actor Steve McQueen, Salt-Flats recorld legend Burt Munro, and of course the man who broke his bones 433 times: Evel Knievel. In 1975 he was wearing a Bell "Star" helmet during his historic Wembley stadium jump over 13 London buses. The jump was a success, the touch down wasn't though. Knievel crashed into the ground head first, still he "only" had a broken hip when he told the 80.000 that he was never to jump again.

Bell kept going though: a seemingly endless procession of safety and comfort innovations kept Bell at the front of the pack, be it helmets for cars, motorcycles, bicycles on and off the track and on and off the road.

Even when Bell revives familiar designs from way back when, as with the Bell 500 or the Bullitt they do it to comply with current safety norms. Style and comfort come as a matter of course. When shopping for a helmet, just listen to your gut feeling, you can't go wrong. 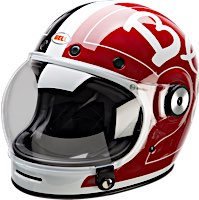 Bell Bullitt Full Face Helmets
For the friends of vintage machinery there’s hardly a more stylish way of keeping their noggin out of harm’s way than with this full face helmet. The US manufacturer Bell dusted off the moulds of his legendary Star helmet and, using the latest technology, remanufactures it under the name Bullitt. In short, vintage look and state of the art safety complying with current safety norms. 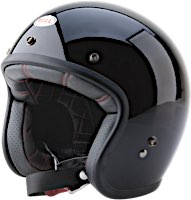 Bell Custom 500 Open Face Helmets
It‘s yesterday‘s style you want, but today‘s safety you need. Introducing the Bell 500. This reincarnation of Bell‘s first ever helmet was conceived in 1954 by Roy Richter and named after the Indianapolis 500. Only a few years later all 33 drivers in the USAC‘s 500 mile race series were wearing Bell helmets. If it‘s 500 miles or just a trip downtown: the Bell 500 is setting new standards for open face helmets: 5 shell sizes for optimum fit and a low profile look. There‘s a fiberglass shell and the interior is made of dual density EPS foam for optimum impact resistance.