S&S continues the success story of their Super E and G carbs with a special Black Series edition that was first released for the S&S 55th Anniversary in 2013. These carbs feature a distinctive gloss black Enduraguard coating, which is heat and chemical resistant. In addition to cool cosmetics the Big Bore versions have specially machined venturis for up to 7% more flow. The Black Series carbs are not offered as complete kits, but as carburetor only. That gives you complete freedom to work with these carbs in any custom application. The Super G versions are recommended only for racing applications or engines with 1600 ccm and more. 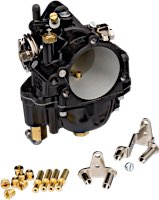 Upgrade your older S&S Super E or G carburetor with this 90° fuel inlet swivel fitting. It can be rotated a full 360 degrees so you can use common fuel lines without the usual space problems.
more …

O-Rings for S&S Carburetors to Manifold and Insulator Block

Running an S&S Super E or G carb on Knuckleheads and Panheads results in the Teardrop air cleaner sticking out pretty far and interfering with your right knee. This low profile version features a shortened cover and a modified base plate which reduces the overall height of the air cleaner assembly by 25 mm. Thus you gain more legroom and the whole air cleaner tucks closer to the engine. Looks good on other models, too.
more …

Special manifolds for longer than stock cylinders. To be used with S&S Super-E and G carburetors.
more …

This carb support bracket is made to support your intake manifold in order to keep your carb up and safely route your gas line keeping it off the cylinders. Will work with most carburetors.
more …

The Panifold is a specially engineered intake manifold for Harley O-ring style Panheads. It features radiused corners and a directional "Y" shape inside. This shape helps the flow and delivery of the air/fuel mixture to the combustion chambers. According to the manufacturer the peak increase is 18% in the midrange, just where you ride most.
more …

Draining the S&S float bowl for a jet change or to remove water from it after heavy rain can be messy with gas flowing all over your engine and hands. This drain valve replaces the stock bowl plug and makes this a quick and clean job. Just turn the little knurled wheel and drain the float bowl into a suited container within seconds. Now you´re ready for a completely safe and dry jet change or float bowl removal.
more …

Complete needle valve with seat and fuel inlet swivel fitting. The latter can be rotated a full 360 degrees so you can use common fuel lines without the usual space problems. The tip of the Keyster valve is made from a highly alcohol-resistant rubber compound.
more …

Special limited edition old style air cleaner covers for Super B and for Super E/G carburetors. These polished covers are faithful reproductions of the original sand cast products with raised “S&S Cycle” writing instead of the modern “S&S Super”. These covers will be sure to bring back memories of the days when S&S L-series and Super B carbs were the hottest thing on the road. Perfect for an old school chopper!
more …

High flow velocity stacks whch directly bolt to your carburetor. They do not feature a breather system which has to be ordered separately if required.
more …