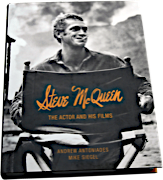 Book »Steve McQueen - The Actor and His Films«

Book »Steve McQueen - The Actor and His Films«

The definite account of every film that the iconic actor made. This lavishly illustrated book devotes nearly 500 pages to Steve McQueen's career and tracks his journey from juvenile delinquent, to Marine, to an aspiring actor breaking into Hollywood, until he became a global superstar and the highest-paid actor of his era. Included are numerous behind the scenes tales of events that occurred leading up to and during filming, and fascinating insights into McQueen's acting techniques and motivations. Each film is allocated one chapter. The chapters begin with a precis of the particular movie. Then events surrounding its making are described, uncovering new facts and insights. This is followed by an analysis of its success, and finally a significant scene is discussed in detail. Steve McQueen: The Actor and his Films is extensively illustrated with over 1,000 color and black and white images, including posters from around the world, lobby cards, memorabilia, many never-before seen candid stills and rare vintage advertising materials.